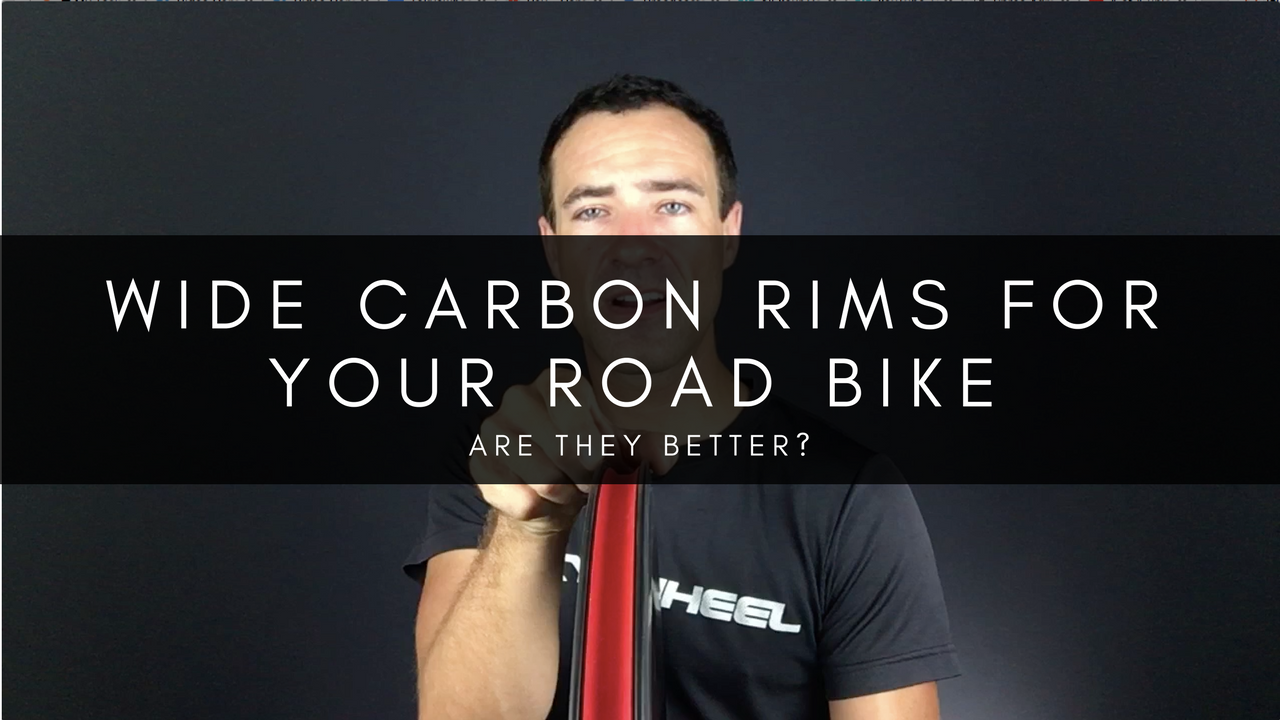 Wide Carbon Rims For Your Road Bike, Are They Better? [VIDEO]

Today we're going to be talking about wide rims.

Are they better than standard rims? And should you get them?

Normally a classic wheel is going to be about 19 millimeters wide on the outside.

Whereas, this particular rim here, and generally most of the modern wide rims, they're going to be about 25 millimeters wide where the tire mounts, and then the internal width there is going to be something like about 19 millimeters, like on this wheel.

One, you're going to get better control and handling.

Because this is wider, this allows not only your tire to widen a little bit.

You get a little bit of extra control from having a wider tire, but you're also going to get extra control, because of the shape of the tire. When you have a narrow rim, when you mount the tire, it's kind of squeezed in the middle.

When you're turning, it's not a perfectly round tire shape, that's not consistent and predictable.

On a wide rim, what you're going to get is that tire's going to widen out, and become more circular, almost like a tubular tire.

That's going to give you a better, more predictable handling on your turns, because of that rounder tire section.

That's a big benefit, that is huge, the control aspect of that.

The next one would be the reduced rolling resistance.

This can reduce rolling resistance, because of the way that it reduces how much the tube inside of your tire needs to be sort of pulled along and compressed, as your wheel rotates. You can have reduced rolling resistance.

That will result in a higher top speed, less power in watts necessary to ride.

The other one is aerodynamics.

You get two aerodynamic benefits.

And if your wheel is not as wide as the tire, then this shape here, when you mount the tire on, is not going to be symmetric.

And that means that it's not going to be as aerodynamic when the air comes over the tire, but then later on, the air goes over this side first, and then over the back of the tire.

That might be a little bit confusing, but basically by having a symmetric shape, and having the rim be as wide on the backside as the frontside, you're going to get better aerodynamics over both sides of the rim.

You're also going to open up an air cavity for the downtube on your bike.

Your wider wheel is going to split the air a little bit more than a classic narrow wheel, and that extra split is going to allow the rest of your bike to more easily go through that air. You're going to get an aerodynamic benefit.

There are other aerodynamic considerations with rim shape, that aren't necessarily specific to having a wide tire there. We'll get into those in another video.

But basically wide rims will give you that increased aerodynamic benefit.

What are the cons? Well, you get a little bit extra weight on a wide rim, because it's wider.

Now, it's not like you're increasing this part of the wheel, which is the deeper and heavier one.

But in general, the benefits far outweigh that, and you should definitely choose a wide rim, like 25 millimeters like this Tokyo Epic 5.6 rear wheel here.

It's going to be very much better for you.

I would definitely recommend it, and you should do it, and check it out.

Come to the modern future. Ride some wide rims. They're way better.

Thank you very much.