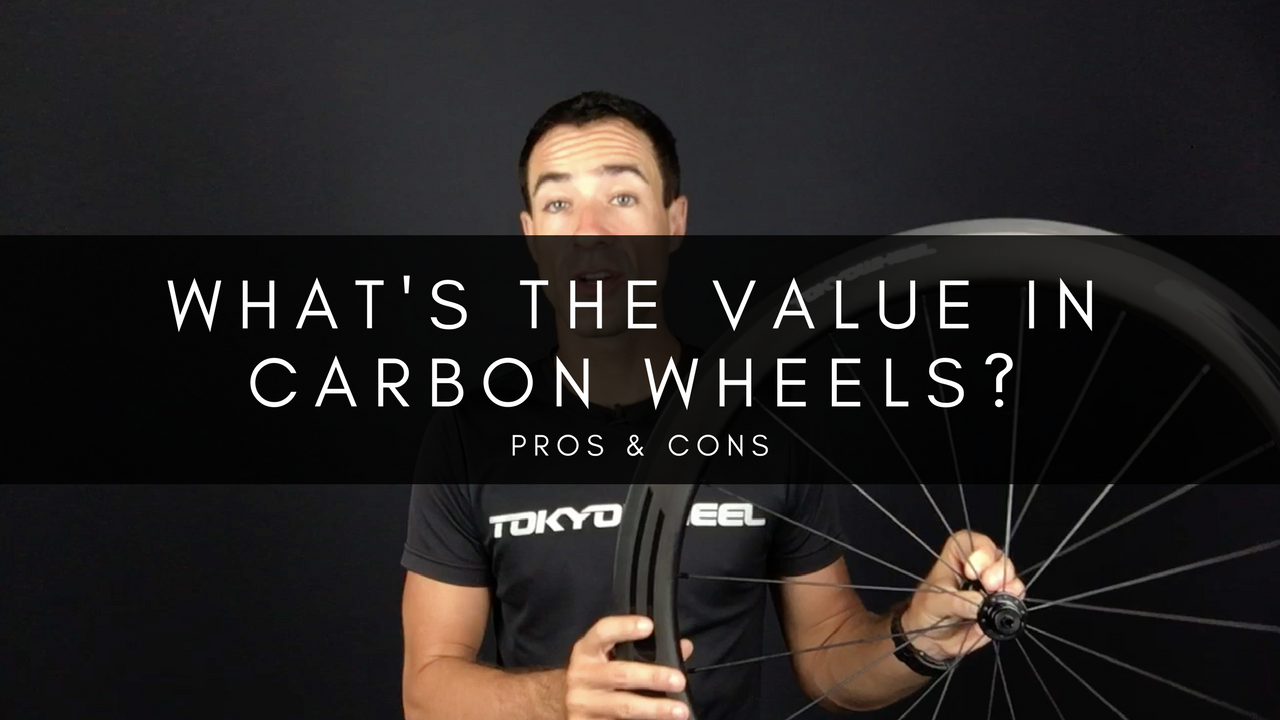 What's The Value In Carbon Wheels, The Benefits, And The Pros And Cons? [Video]

One of the questions that I get asked all the time is what are the benefits of carbon wheels, and what's the value of carbon wheels compared to a standard metal aluminum wheel? I'm gonna give you that info today, so let's get right into it.

The big benefit of carbon wheels is that when you put them on your bike, you will ride faster with less effort right away, instantly. And that means that you are gonna enjoy your cycling more. That is the big benefit.

When it comes to upgrades, the wheels are the number one upgrade that you can make. A lot of times people are considering getting a new bike, many times you don't even need to get a new bike as long as it's fitting you well. Just put some carbon wheels on there, it'll feel like a whole new bike and you'll get a lot of performance and a lot more enjoyment out of it.

When we are looking at the wheel, the big thing that you're going to see as a difference is the carbon in the rim. This is a lighter rim than an aluminum wheel. And what that means is one, if you are accelerating or you're climbing, you don't have to carry that much weight. Less weight to carry means you're going to go faster. But also, because this is rotating weight, it's much more important than non-rotating weight, like the weight on your frame. Reducing the rotating mass here on the wheel, and especially on the outside where the rim is, is very important for sprinting, climbing, acceleration. Those are benefits that you're going to get with carbon wheels.

Another benefit is aerodynamics. This part of the rim here, on carbon wheels, can be made to be deeper than a traditional aluminum wheel, which would normally be somewhere around 20mm, instead of a carbon wheel being 40~100mm deep. The shape is also optimized for the air flow going over the wheel. What that means is that these carbon wheels will cut through the air easier than your aluminum wheel and they will also not stir up the air as much as they spin. That means that you're going to be more efficient in your riding. You're going to be more aerodynamic, you're going to have less drag. That results in it being easier to ride. Not only will it take less effort for you to go a certain speed, but you'll also be able to achieve a higher top speed and maintain that top speed easier. On average when we hear

back from our customers we're seeing people go one, two, or three miles an hour faster (4~5kmh) on their top speed, and that makes huge difference over a whole ride.

You're going to have a faster top speed, using less effort with the aerodynamic carbon rim versus your aluminum rim.

Another benefit is that carbon is considerably stiffer than aluminum. That means that we have a very stiff rim on a carbon wheel. And that results in more of your power being transferred from your body through your feet, through the pedals, through the wheel and into the road. That generates more speed moving forwards.

This also allows us to use less spokes. Because the rim is significantly stiffer, we don't need as many spokes. With an aluminum wheel you might see up to 32 spokes on a road bike wheel, but generally carbon wheels will have 20 and 24 spokes. That's another way that we reduce the weight of the wheels.

There you go, those are your big benefits. Weight, Aero and Stiffness.

You get a couple other small benefits as well. They look great. The carbon wheels, the all black, the deep shape, it looks great, there's denying that. They also sound great when you're riding, the wheels make a distinct zooming sound. It sounds powerful. If you've ever been passed by somebody with carbon wheels, you know how cool they sound.

Those are all the big benefits of carbon wheels. You just take your old wheels off, put these on and you're going to get all that value instantly, from the first day. Thanks very much.